I did not sleep too well last night between Butter Cup’s snoring and the imbecile who kept yelling at her to stop. Honestly, who gets out of their tent to go into the shelter to yell at the person snoring? What a jerk! It’s not like Butter Cup does it intentionally. I don’t suspect this guy will be successful at his thru-hike if he can’t handle a night of snoring.

Both Ty and Eric got off trail today. One by one, people are tapping it. It’s so precarious too. One day they’re at camp, the next day their calling for a shuttle at a gap and getting a ride into the next town with the intention of going home. Most of the time, I don’t even see it coming. I wonder if they did and just didn’t speak up about it. 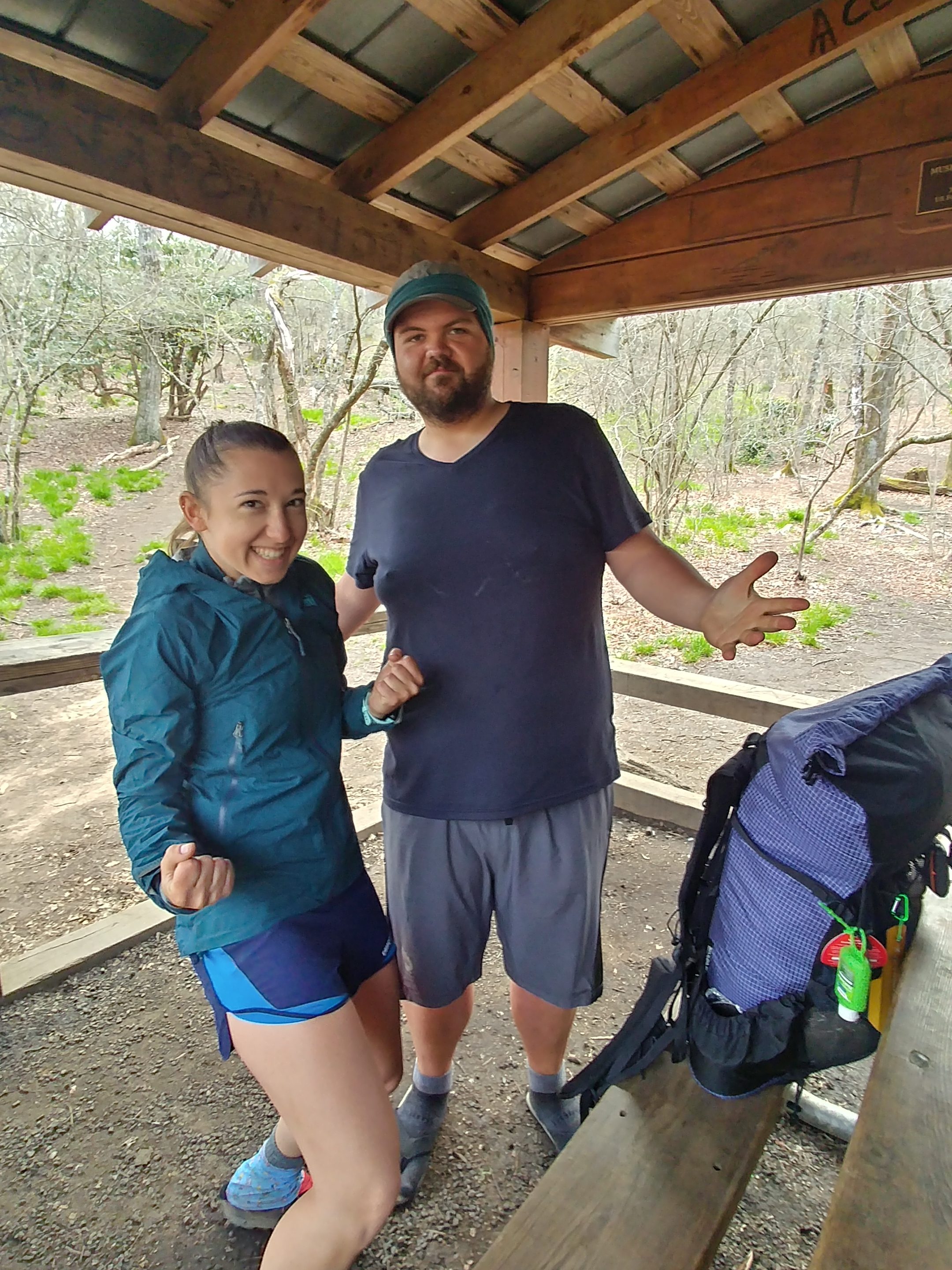 Eric and I living it up at Muskrat Shelter.

I got to camp around 4pm but the shelter was already full. Rain was in the forecast so I really wasn’t surprised. Sitting by the fire that evening, I got a call from my mom who wanted to inform me that Cori was in the hospital and may require emergency back surgery. For several hours I was terrified to think my worst fears might be realized. I was concerned for both his health as well as how this could impact my hike. Would I have to go home? Fortunately, the doctors said Cori would not require surgery so I could rest assured.

I woke up to the pitter-patter of rain falling on my tent. As peaceful as the sounds of rain are, the idea of breaking down my tent in it was daunting. It’s hard to motivate yourself knowing you have to exit your dry tent and pack it all up in the rain. However, the hike must go on so there’s nothing else to do but embrace the suck.

It was an easy morning as I covered 5 miles in just an hour and a half despite the rain. Normally, my pace is about 2 miles per hour. However, this is not a sign of improvement. The terrain leading up to Albert Mountain just happens to be rather flat. Since I’ve done the climb over Albert before, I knew what to expect. I’ve heard Albert Mountain is a tiny taste of what the White’s are like. For one-third of a mile it is all rocks and in some places you have to climb hand over hand to get up. The top rewards you with not only a stunning view but also marks the 100 mile point. The rain finally let up just as we were reaching the top and the sun poked through the clouds to welcome us with a kiss.

We woke early and hiked to Winding Stair where we experienced some trail magic. Yay, snacks! Then we hitched a ride, my first hitch ever, into Franklin. 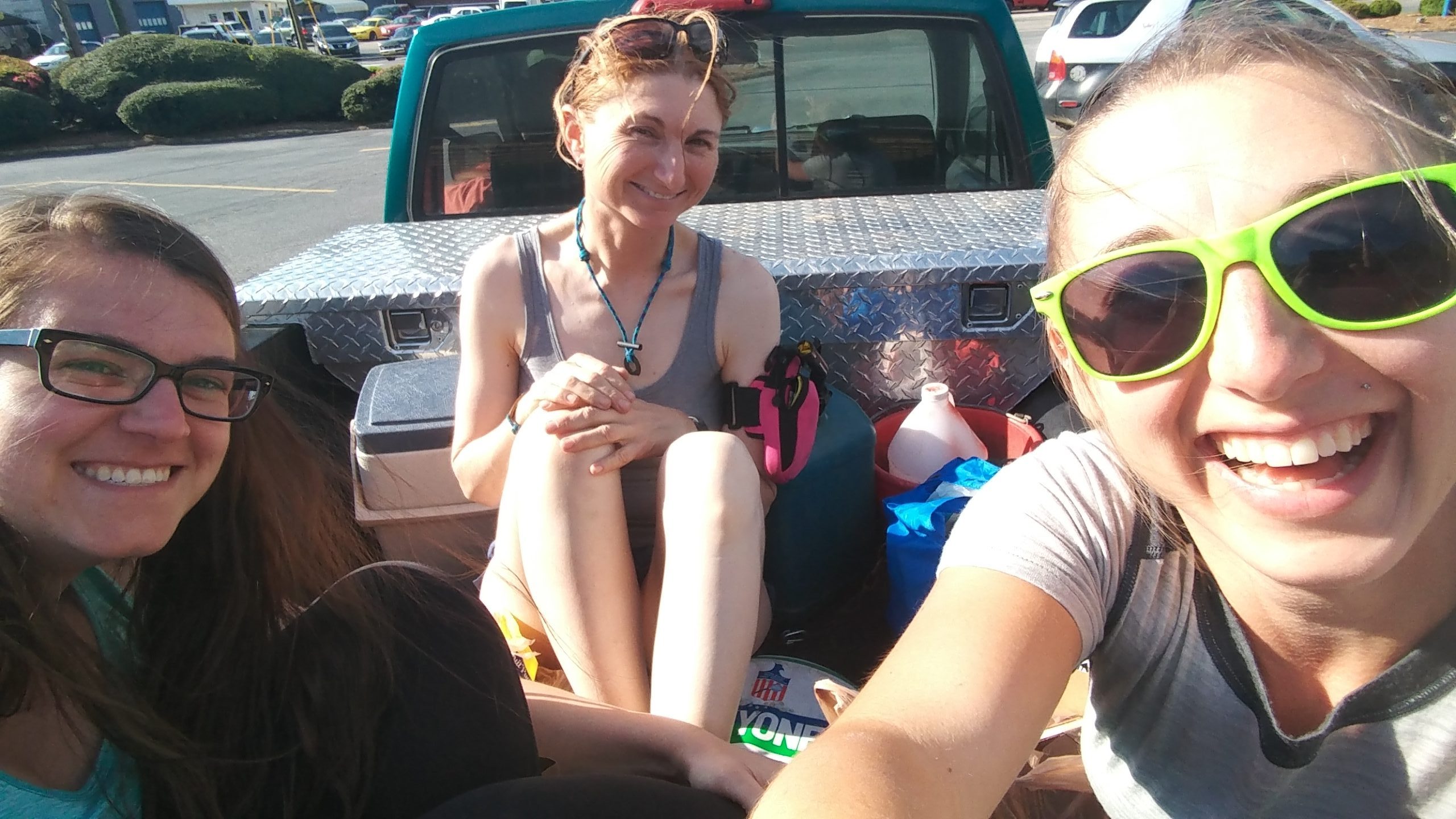 Catching a hitch in Franklin.

Today, I learned the expensive lessons of never trying to resupply when you are hungry. I spent more money than I had budgeted and purchased items that were heavier than necessary. I also learned that there is not a lot of rest on a nero. It’s just one hitch after another, from Walmart to the Dollar Store to the hotel to the laundry mat back to the hotel then unpacking and repacking your backpack. Next thing I knew it was 10pm and I still wanted to get a blog posted! Nero’s are stressful!

We returned to trail around noon. After yesterday’s ambitious resupply, my pack was entirely too heavy. Needless to say, my back hurt all day and as a result I moved rather slowly. Though we only hiked 8 miles, I’d say today was the hardest. It’s not that the terrain was difficult; I just really struggled under the weight of my pack. When we got to camp, I tried to eat as much food as possible just to lighten the load. Again, lesson learned.

It was an easy day of hiking. We stopped for an early lunch at Wayha Bald. The views were amazing; the best I’ve seen yet! 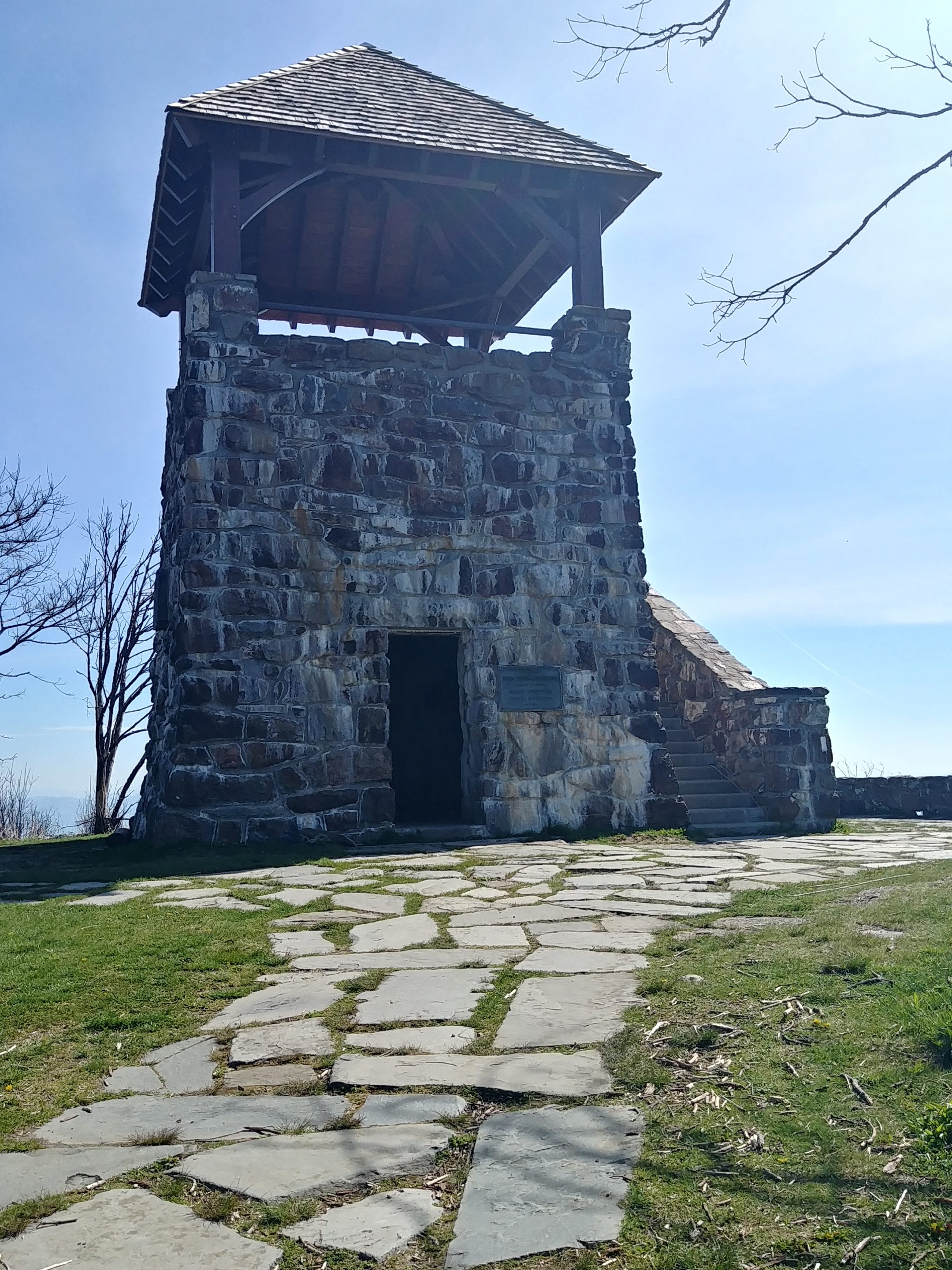 The tower at Wayha Bald.

The shelter at Cold Spring is one of the older shelters along the Appalachia Trail. It’s kind of neat to sleep in a piece of AT history. There is a creek that flows in front of it, so I got down to my skivvies and took a “bath” while eating Reese’s Pieces. The girls got a real kick out of it. I’m so glad to have such a fun tramily.

My knees are becoming achy and I’m not the least bit sad to have hiked a few shorter stretches in the last few days. I have been stretching and doing yoga morning and night in an effort to combat the aches. My calves have seemed to adjust but knees only grow more agitated by the day. This has caused me to hike at a slower pace. Hopefully my body will become accustomed to the discomfort and I will be able to pick up the speed soon.

Fossey and I getting our morning stretch on.

More stunning views today; we went to top of Wesser Bald tower where Fossey and I did one of those topless photos. I always wanted to do one and Wesser Bald seemed like the right place.

I hiked into the NOC to sleep in their bunk house for the night and do a bit of laundry. The girls stayed in a shelter and we will be reunited in the morning for the big climb out of the NOC.

I met up with Fossey and Zia around 9:30 am. After shopping at the general store and printing our permit for the Smokies, we began the hike out of the NOC. In contrast to yesterday’s long descent, today was a mirror image, a long ascent. As such, we agreed to only hike 7 miles. We got to the shelter pretty early and met other hikers here. We had a great time getting to know our new friends around the fire. Tomorrow we’re going to try our first 15 mile day! 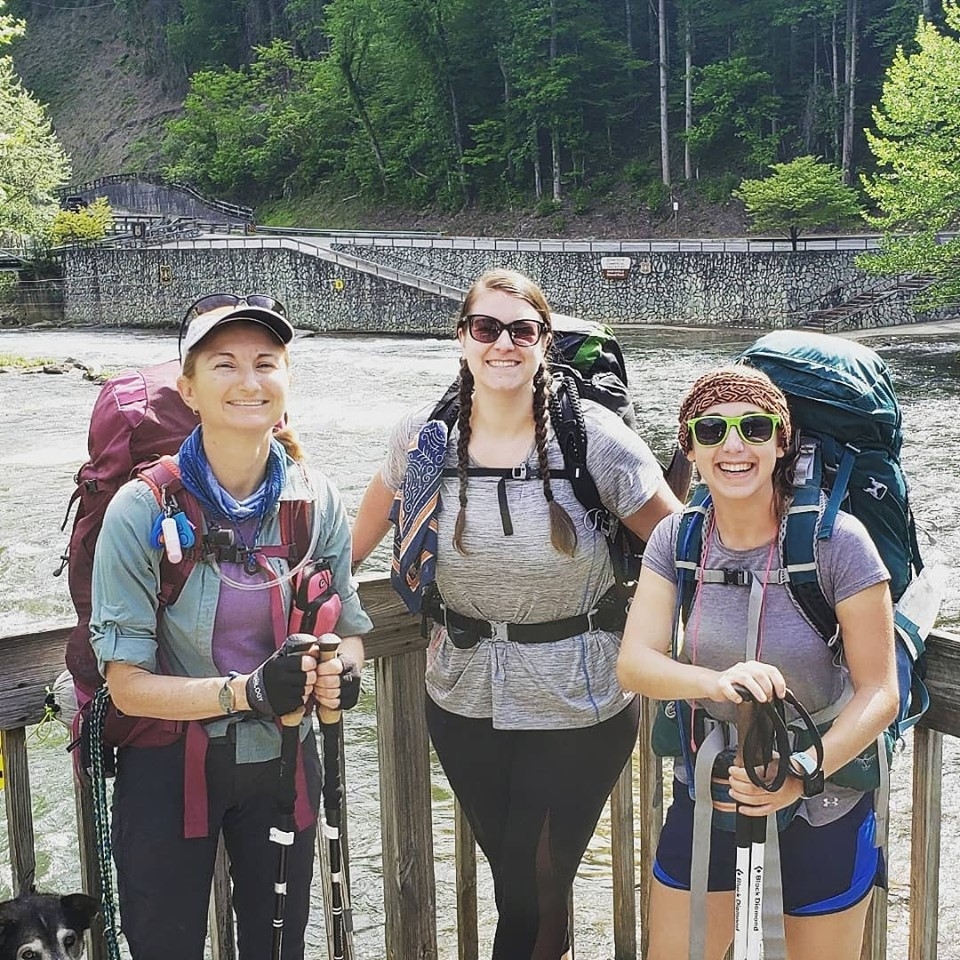 The girls and I at the NOC.

I did it, my first 15 mile day! I am finding that I am slower moving in the mornings than in the afternoons. Perhaps this is because it takes a few hours for my breakfast to fuel me? I’m really loving the simple life out here on the trail. I got to know Gas and Whip more today, two hikers I met at the last shelter. Cable Gap Shelter is another older shelter and is home to several spiders and has the pleasant aroma of poo…

Neroed into Fontana at 6.5 miles for the day. 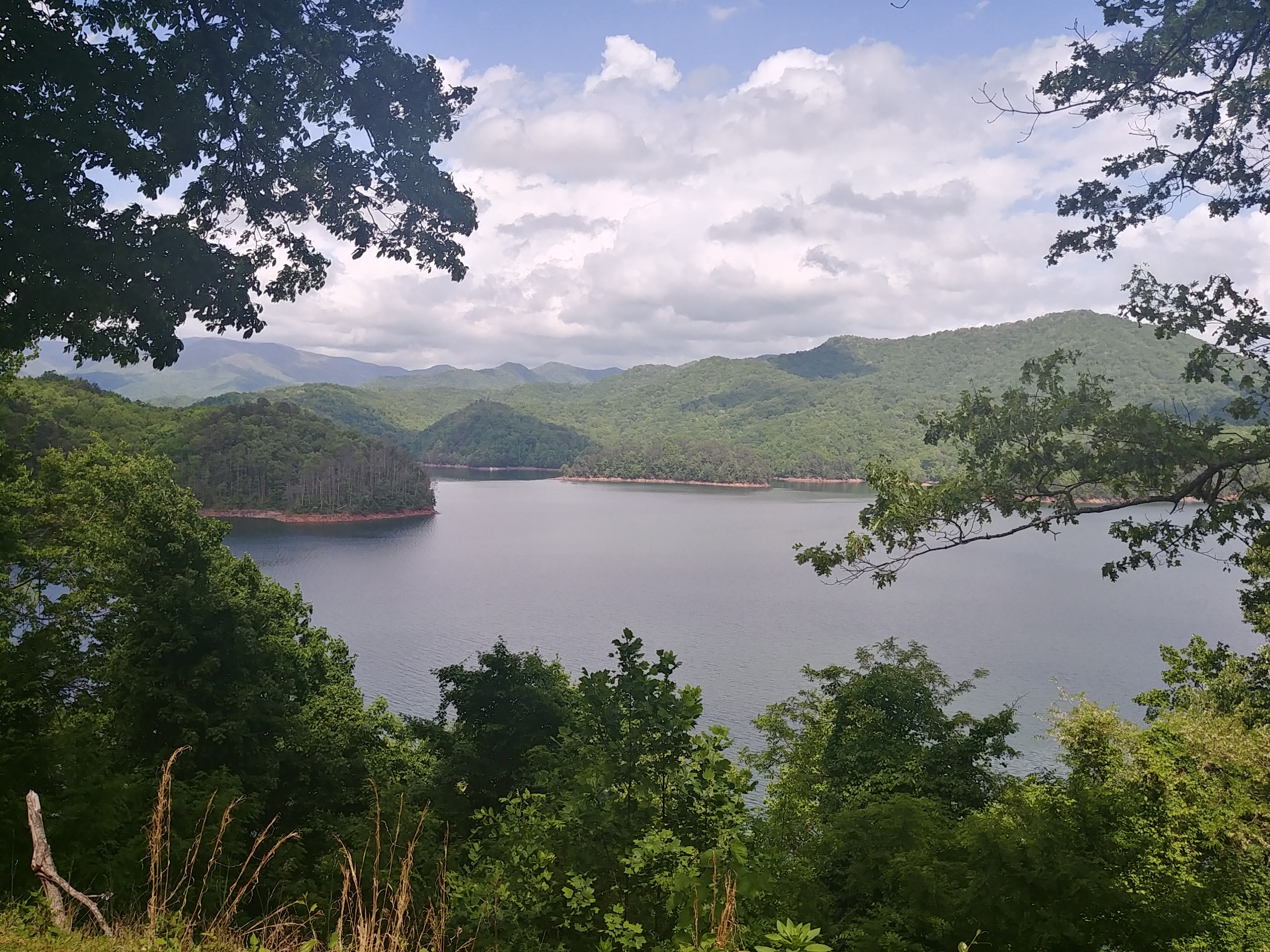 It was a rough night of sleeping as I constantly woke up with the fear of a spider crawling on me. It was all in my head, I think…

I was moving especially slow until it began to rain, that helped me pick up my pace. Then Alan, we also met at Sassafrass Gap Shelter, came up trail behind me. Alan was slack packing for the day since his dad was in town visiting him. I kept pace with Alan for promise of a ride into the village. At the bottom, I found Fossey, Zia and Gas. We all got a ride to the laundry mat and then went out for lunch. 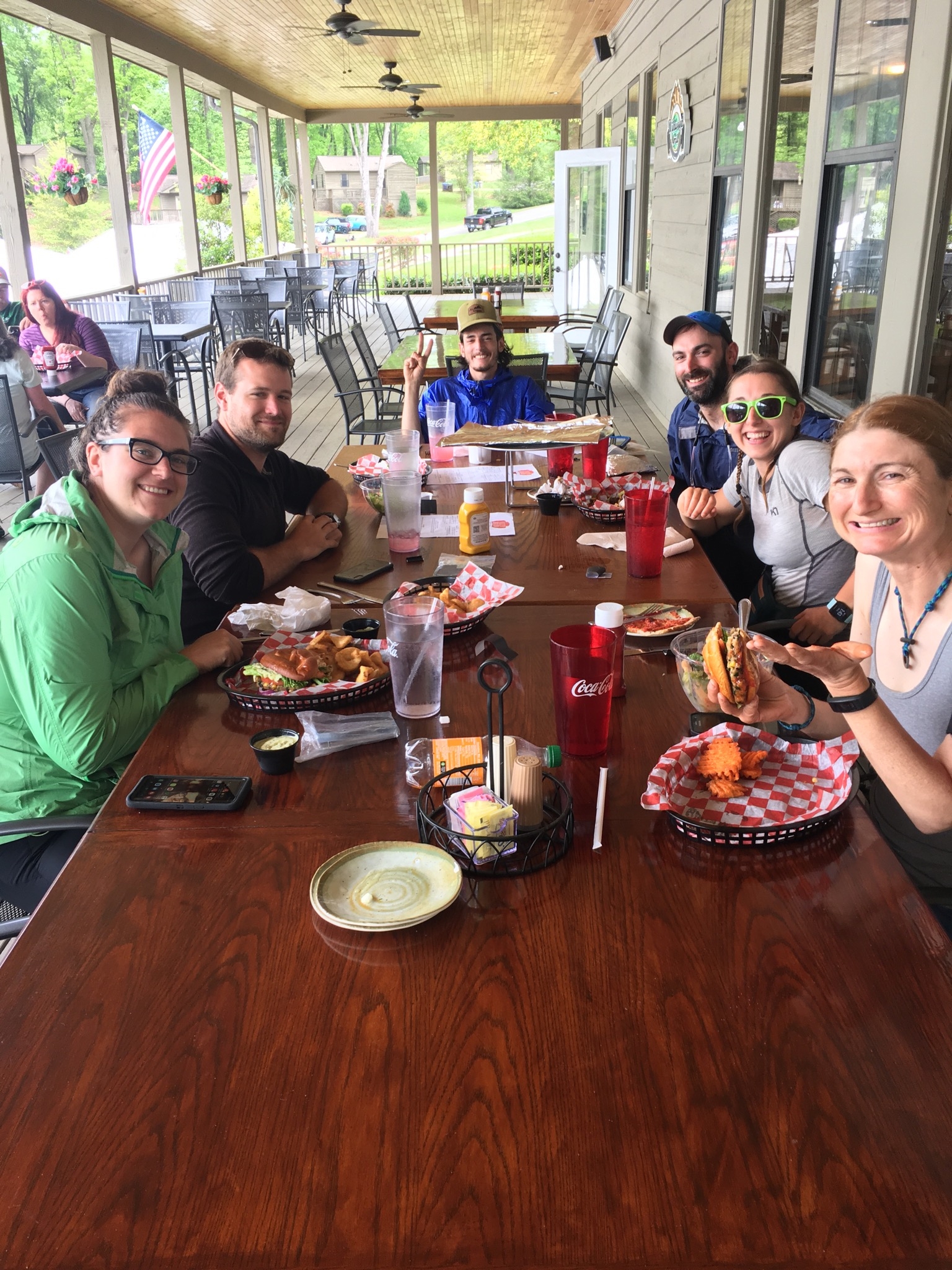 All of us at lunch. From left to right: Fossey, Alan, Whipa, Gas, Petra, Zia

Tomorrow Mike will join me and we will be hiking the Smokies together.