I started writing this post back in May, the week after Mental Health Awareness Week here in the UK. The theme for this year was Kindness. I attended a webinar on this theme and was amazed by how interesting the topic was. My key takeaway was that being kind to others not only helps them out but also improves your own mental health. And that kindness is, and always will be, far more contagious than COVID-19.

When listening to this talk I couldn’t help thinking about the AT. The Appalachian Trail community is one of the kindest and most supportive I have come across. I’m talking here about the community of people actually on and around the trail, not those who argue in Facebook forums about whether or not slackpacking makes a thru-hike invalid and other pointless subjects.

I formed the idea of this post, collating stories of kindness that my hiker friends and I experienced on the AT last year. My main aim was to spread some love during the difficulties of the pandemic and remind my friends of happier times. 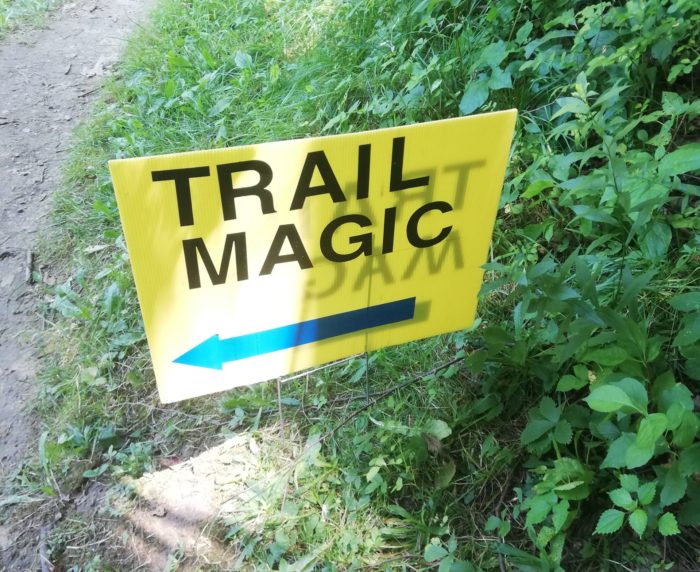 A welcome sight to any hiker.

By this time it was late May and after months of our news being dominated by coronavirus there was suddenly a different virus at the forefront: racism. The Black Lives Matter protests have made us all confront the uncomfortable reality that our society, including our much-loved trail communities, are not as kind to everyone as they are to some. This made me question whether I should write this post at all, whether I can truly say that the trail is a kind, all-loving place when the reality is the opposite for other people.

However, from what I have seen 99% of the AT community is made up of kind people who treat everyone with respect. Almost every single person or organization that I am aware of in the hiking community has recently stood up and made some sort of commitment to making the world a better place. From my own trail friends I have seen people attending protests, donating money, promoting black businesses and voices on social media, or quietly educating themselves on this subject. I know that my personal viewpoint cannot speak for everyone and I am by no means an expert in any of this. I am sorry if anyone reading this has not felt welcomed by the AT community. I hope that in future we can do better. 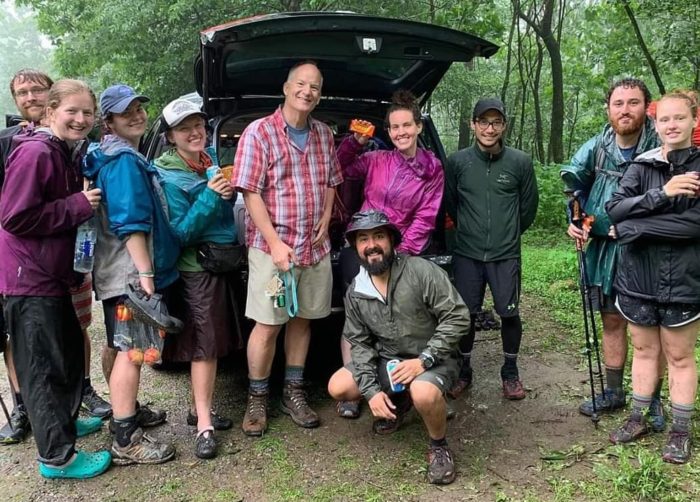 So, below are the stories of unexpected kindness experienced by eight 2019 hikers. I was surprised that most of these do not involve planned trail magic or established trail angels; they were spontaneous acts of kindness. When I first asked these hikers about acts of kindness they’d experienced on trail the first response from several of them was “there are so many, how do I pick just one?”

I’m not here to make any profound statements about society, but reading these stories has made me wonder. What would the world look like if each individual could look back over their year and say that they’ve experienced so many acts of kindness that it’s impossible to pick just one?

Here are the stories.

“During a severe heat wave in NY, a woman gave my trail family and me a hitch from town to the trail. We were reluctant to go back, but we were getting low on money and couldn’t justify staying in a hotel. After hearing about what we were doing, she opened up her home to us for as long as we needed to stay. We were there three nights. She grilled food for us, bought us fresh veggies from the local farmers market, and even took us out to eat. After our stay and learning more about the Appalachian Trail community, she became a trail angel who operated by word-of-mouth, hosting other hikers who came through later in the year” – Red Wiggler 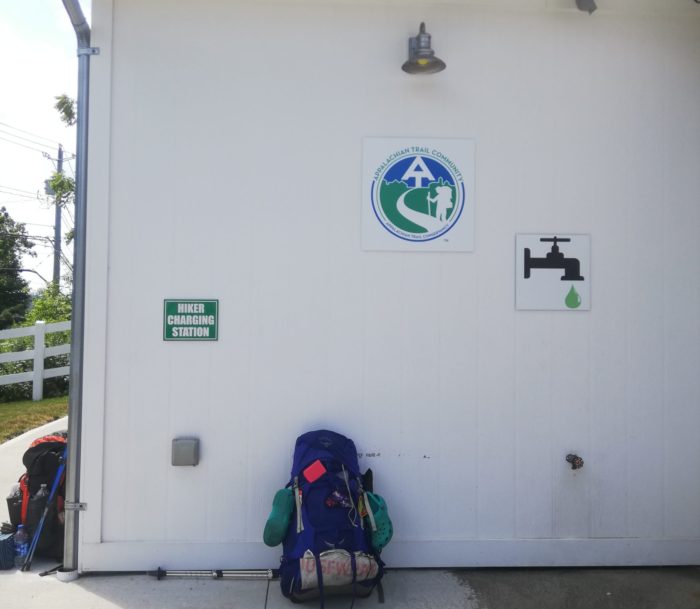 A phone charging and water station provided outside an ice cream parlor in New York.

“I was resupplying in Hiawassee, and while I was shopping a huge rainstorm had moved in. I was standing outside the store planning on waiting it out for a bit (I would have been there a while) and a lady with an umbrella offered to walk with me a couple blocks so I wouldn’t get wet! The store was still about a mile away from the Budget Inn and I didn’t want to make her walk all that way so I sprinted the last bit, still got soaked, but the umbrella was such a sweet gesture.” – Plume

“Up in Connecticut I got pretty sick one morning, was very afraid it might be Lyme disease. We were already planning on visiting our friend Sunrise that night but I downright wanted to collapse so she picked us up early. She gave me a comfortable place to rest at her house and I spent the day watching Bob Ross while covered in about five blankets. The following day she drove out of her way to take me to a hostel as she was heading back to New York.” – Green Slouch

“While we were sitting outside a gas station in Dalton, Massachusetts, a little boy came out and handed me and my partner some bottles of water they just bought. The dad said the boy asked what we were doing and then wanted to get us something. One of the smallest gestures on the trail but showed the range of kindness, even children, showed to the hikers.” – Avo “Cado”

“There was a mom and dad who gave all of us PB&J sandwiches despite having continually having the cops called on them by the restaurant down the street. I also had a guy give me a hitch after passing me. He turned around and dropped me off despite the fact he would be late for work.” – FUJ 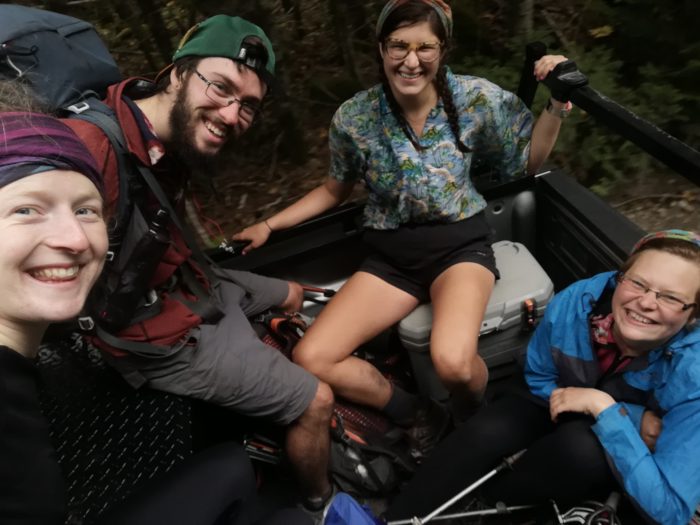 Getting a hitch with Red Wiggler, Tomatillo and Mosey.

“My Appalachian Trail experience was defined by the kindness of others. One of my favorite memories is of my time in Roan Mountain, Tennessee. My tramily and I hadn’t really intended to spend a day and a half in town, but the trail laughs at your plans. By a series of events we ended up camping in the park over the Hikerpalooza festival weekend. When we woke up in the morning, we met an incredibly hospitable woman named Birgit who thoroughly convinced us to come stay at her house for the night so that we could shower, rest up, and enjoy the weekend’s festivities. We did so, and it was one of the most restful 24 hours on the trail, full of cake, pizza, puppies, amazing showers, clean loaner clothes, beer, Game of Thrones, and more than anything, a chance for a total stranger to become a close friend. We went back to the trail refreshed and ready to head north, and I’ll never forget the feeling of the trail town looking out for us.” – Passport

“One night in Maine we decided to camp right on the road to go to Rangeley because it had been a really hard day and we really didn’t want to go any farther. Plus, we had a really good view. We woke up in the morning to rain and wind taking our tent down for us and we walked up to a parking area that was really close to where we camped and there were two people there. One of the people was section hiking the whole AT and the other one was her partner who was her support driver. We had decided that because of the rain we needed a hot breakfast and so she offered us a ride into town. Once we got to town she asked to have breakfast with us and ended up paying for our meal after taking us into town. Then after that, we wanted to dry our clothes and she drove us another few miles to drop us off at the laundromat just so we didn’t have to walk. It was so great to have that on that particular morning. As they say, the trail provides.” – Bumblebee 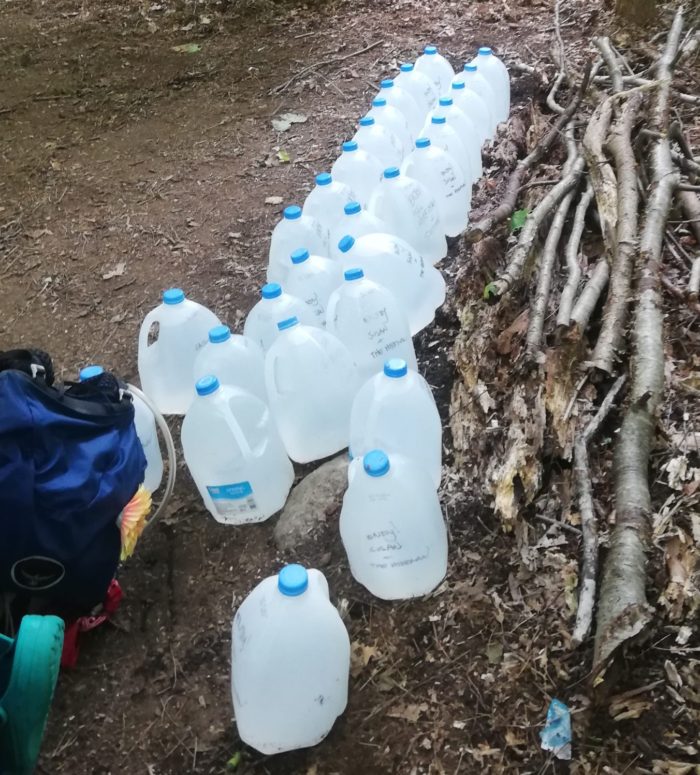 A large water supply maintained by a trail angel in a particularly dry section of the trail in New York.

“My trail kindness story happened in New York after the descent from Bear Mountain into the park skirting Hessian Lake. It was such a welcome shock to transition from the stillness and silence of the wilderness to the buzz of civilization. What seemed like hundreds of families of all different ethnic backgrounds were having cookouts along the beach. The aromas were incredible, and I think my face showed how hungry I was. At least ten different families pulled me aside as I strolled through the park, each of them handing me decadent morsels of various meats and cheeses and roasted veggies. These kind folks reached out despite the language barrier between me and them. I thanked them in return and kept moving along, immersing myself in the sights and sounds of human life. It was a moment like no other that I’ve experienced. I’ve thought about those 30 minutes every day since.” – Two Fingers

Thanks to those that contributed to this post and to everyone who’s out there being kind to ALL hikers. For more examples of trail kindness see any of my previous blog posts as well as, I’m sure, those of pretty much any blogger on this site!