This hiking season, well this entire year, really, has been one of the most bizarre in recent history. As the spring began settling in, promising all of us hikers more moderate weather, beautiful blooms, and opportunities for swim-breaks on trail, so came the rise of a virus the likes of which we had never seen.

Yes, COVID-19 sucks. It sucks bad. Ending thru-hikes, ones that many of us had spent months if not years training, saving, and planning for, sucks. Being given moral ultimatums by the organizations that represent the trail communities and by the general public sucks. Not having any information as to how bad this pandemic might get and having to make choices that may place the well-being of others at risk sucks.

But not everyone believed the situation was as dire for the thru-hiking community as others. This is the story of two such hikers, a wonderful couple that I was able to spend a few days of my AT experience walking with. We hiked through frigid storms, took shelter in the Blood Mountain Cabins, climbing up ridgelines before the sunrise, and generally just enjoying our time together on the wonder that is the Appalachian Trail.

“Posh Jesus” (PJ) and “ Meg Griffin” tackled all 2,193 miles of the Appalachian Trail this year despite the challenges and complications that came with hiking during the era of COVID-19, and this their story.

The couple left Amicalola Falls State Park on February 29. The season was about as normal as anyone had expected. Some days were colder or wetter than others, and there were plenty of mountains to conquer before growing into their trail legs. I met them both at the Gooch Gap Shelter where we dubbed our band of seven or so misfits the “Goochie Gang.” We made plans to tackle the 15.6-mile trek over Blood Mountain in rainy, wintry conditions to get ourselves a comfortable night in the Blood Mountain Cabins due to a series of storms and tornadoes that were harassing the Southeastern US. We broke into groups so no one was going over Blood Mountain alone, and just an hour or so after reaching the cabins I was greeted by the sound of some poor, estranged hikers screaming “GOOCH!” at the top of their lungs. This, of course, was my two new companions, whom I waved down and brought into the warm, dry cabin.

Fast forward a few days: I pulled some bigger miles and got ahead of our group just to catch an acute case of sinusitis. The infection left me feeling weak and moving slow. I recovered and caught PJ and Griffin as they were passing through Franklin, NC, alongside the rest of our original group. Everyone was cold and ready to be out of the rain, and their frantic waves goodbye from the back of the shuttle was the last I would see of any of my Goochie Gang.

Soon after came the reality that none of us were aware of: COVID-19 had grown beyond campfire jokes about Corona beer and was sweeping across the globe. We had no idea of the implications of staying on trail, and the guidelines suggested people keep their distance from one another. The general consensus was that staying in the woods was the best way to keep our distance from everyone else as best as we could, but the information we had wasn’t great and no one really knew how to take the warnings of going home.

Most of our group left homeward as the virus began spreading across the East Coast.

PJ and Griffin made the decision to stay.

Walking Against the Grain

The Appalachian Trail is widely regarded as one of the most social trail experiences that the US offers with prominent trail angels providing shuttles and magic in almost every town. The AT has a massive network of fellow hikers both deep in their treks and ones just starting to connect with, not to mention the frequency of day hikers and overnight folks that bring a little extra life (and sometimes tasty beverages) to the evening campfire. But not this season.

I asked PJ and Griffin about how their hiking season was affected by the solitude that came with the majority of hikers delaying or abandoning their thru-hikes altogether. “I’m grateful we had such a difficult year,” PJ quickly retorted, “I can count on one hand our trail magic.” This season appeared to be more like the Appalachian Trail of old from a time before thru-hiking had gained its massive modern popularity and the grande trail-town infrastructure that makes a 2,200-mile trek more feasible. The couple insists, however, that “we weren’t looking for any specific kind of social experience, we simply were going to finish.” 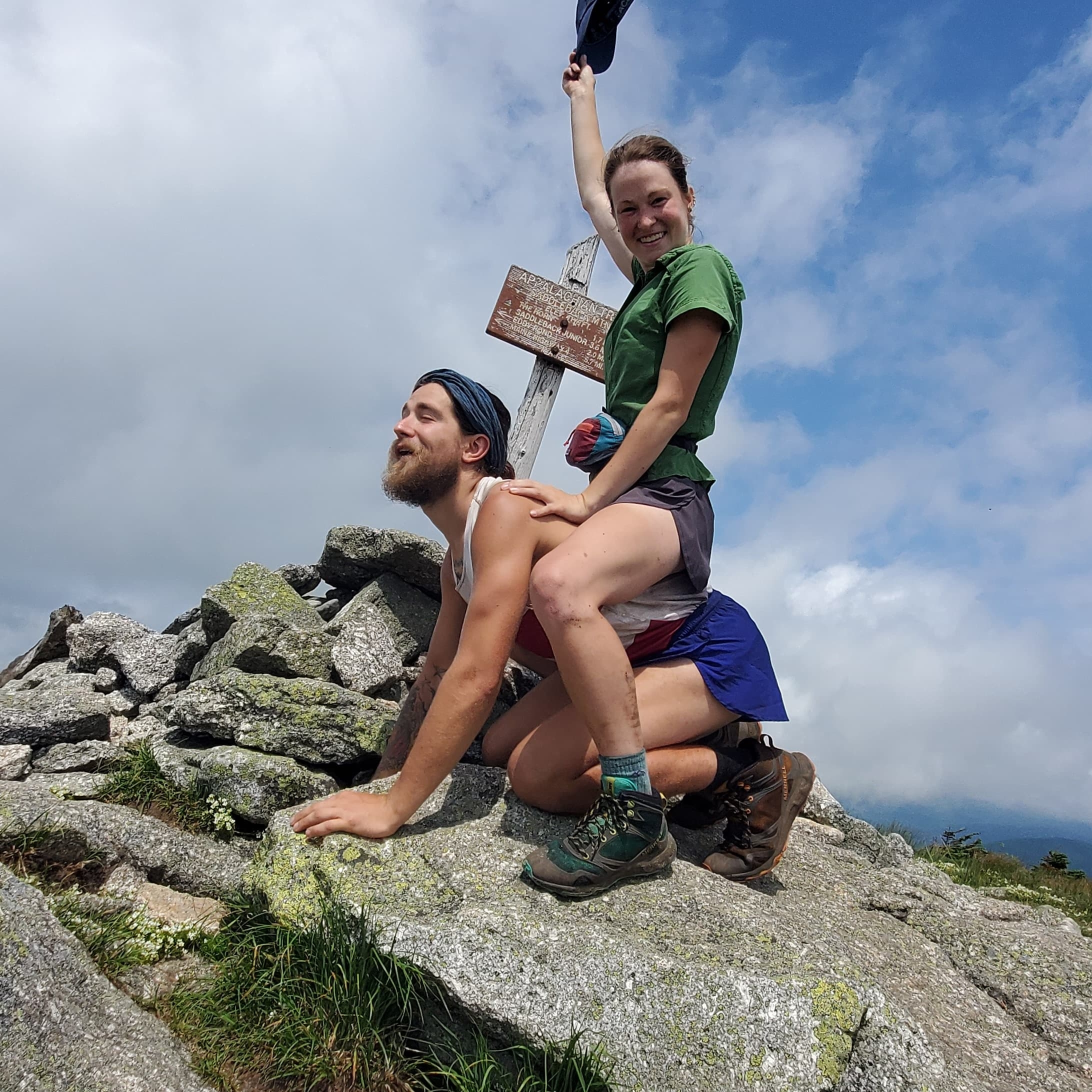 While PJ was the only member of the couple with thru-hiking experience having an 11-day trip as a kid as well as the full 500-miles of the El Camino under his belt, Griffin was definitely prepared to make the AT her first genuine thru-hiking experience. “We lived our own schedule, and we got really good at managing big problems as a team.” When asked how the lack of support affected their hike, the couple brought to my attention their anxiety they had in being on their own in the mountains. “The Whites felt big and dangerous without support.” They recounted the White Mountain huts being closed, and this meant steep, big-mile days to escape the exposure that’s so prominent in the Whites.

It’s not much of a surprise that some of the hiking community who abandoned their trips felt negatively toward the couple for their trek. Aside from a few sly comments from people on social media and a general distaste from those who align themselves with the ATC’s take on thru-hiking this season, I was reassured that the people PJ and Griffin came across were generally supportive. “We had a very embracive experience. People were overjoyed to see us.” The couple discussed how “these seasonal businesses rely heavily on thru-hikers for cash flow.” Businesses such as The Town’s Inn in Harpers Ferry, which took the couple in with open arms after being buried in torrential downpours (a staple of the Appalachian Trail experience) for multiple days. But, as PJ told me, it was certainly about more than money.

“There’s a big difference between the people bashing us online and the generally good-natured, down to earth people of small-town America” the duo insisted. “We said from the very beginning that if people in these trail towns showed us they didn’t want us there, we would leave, but we weren’t going to abandon this hike just from general fear and the ATC’s suggestions alone.”

Would Other Years Have Made for a Better Thru-Hike?

This year will be historic for its divisiveness in the hiking community, and for the challenges it presented to hikers, trail-support businesses, and all trail-associated organizations alike. It created unnecessary moral boundaries between what makes “good” hikers and what makes “irresponsible” or “bad” hikers. I asked both PJ and Griffin to provide some insights as to whether they wished they had hiked a different year or not.

PJ addressed the critics of 2020 thru-hikers in stating that “people will tell you how to live your life, what things you should strive for in life, but you will never find satisfaction in your lived experience by basing it on how other people feel about it.” He told me repeatedly that he wasn’t hiking “in spite” of the ATC’s requests or the opinions of the general public, and assured me that “spite” was never something that affected his decisions at all. “As long as I knew why I was out there, I was going to stay out there.”

In contrast, Griffin spoke more about the actual hiking experience itself. “Doing this way makes me feel more badass.” She says that the isolation that came with this year provided a more inherently rugged hiking experience and that the challenge made the hike worth it. In regards to the villainizing of thru-hikers this season, she claims “it was rewarding to do what I believed was right, even if the trail community wasn’t always behind us.”